Each week we are on the streets in south Tel Aviv, handing out food and ministering to the poorest of the poor in our nation – drug addicts, those enslaved in the sex industry, and those who have fallen on hard times. Now that Israel is in its second national quarantine and the country’s whole economy is shut down again, people who were in a hard place to begin with are in dire straits. That is why our mercy outreach in these times is so critical.

Each week I encounter people whose stories would break your heart. Each week God touches someone in an amazing way. There is one story I would like to share about a man I met on the street who shares my name: Moti. My experience with Moti deeply impacted me and the volunteers who were there serving with me.

Last Thursday we started our weekly food distribution as usual: covid-usual, that is, which means we cannot be in our soup kitchen facility and instead walk the streets handing out sandwiches and drinks where the addicts end up.

I approached a thin man who was sitting against a building who looked exhausted. I asked him if he wanted something to eat. “Yes,” he replied. “I haven’t eaten in two days.” 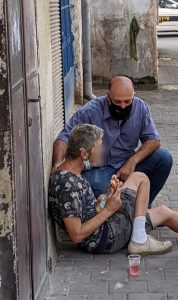 I gave him two sandwiches and sat with him while he ate. I asked him his name, and he said, “Moti.” I told him that is my name too and asked him how he is doing.

“If you want to know the truth,” he told me, “I don’t want to live anymore. In fact, I have been asking God to just take me.”

Moti shared with me his story, which, sadly, is the story I have heard from so many who end up on the streets: He had a job, a home, a family, and then he became addicted to drugs.  In the clutches of his addiction, he lost everything: his job, his home, all his money. All his possessions. And his family too.

“My family tried to help me. But then I would steal from them to be able to buy more drugs,” he sighed. “I lost everything. Now I’m on the street, and I just want God to take me.”

“So, if you want God to take your life,” I asked him, “why don’t you give your life to God?” I started to share with Moti the message of the gospel when he stopped me: “I’ve heard it before. I know all about Yeshua,” he told me. Somewhat skeptical, I asked him, “Okay, tell me what you know.”

Moti started telling me that the Hebrew prophets spoke of the suffering servant Messiah who would come and give his life for the people, that Yeshua came as the Messiah, lived a perfect righteous life, was crucified and rose again, and that His blood is the atonement for our sins.

He absolutely knew the gospel! I asked him if he wanted to pray and give his life to Yeshua. Moti said yes, but when I asked him to pray after me, he said, “No, I need to pray from my heart.”

At that moment, Moti closed his eyes and started praying: he cried out to God, thanking Him for forgiveness through Yeshua, asking Yeshua to come into his life. I and those who were with me felt the presence of the Holy Spirit as he prayed. It was one of the most powerful moments I have ever experienced in all my years serving on the streets. Moti gave his life to Yeshua there on the street.

We prayed for him, gave him the contact information of drug rehabilitation centers run by believers and encouraged him to go. Please keep Moti in prayer!

During this time that Israel is again in the midst of a health and economic crisis, the situation of the poor and needy is getting worse, and there are many who need our help. Your support enables us to continue being there for them. Thank you!