Though the Fire Rages, God Surrounds His People

On Sunday, August 15th Tiferet Yeshua’s WhatsApp women’s group exploded with messages: a fire was raging out of control in the Jerusalem hills and a dear family from Tiferet Yeshua with five children, plus grandparents living with them, was stranded in their village because the fire had cut off all access roads. The wife was in Jerusalem when the fire broke out and her husband was at home with all five children and the grandparents. “They are waiting for the rescue services to evacuate them by helicopter,” was the voice message she sent in the WhatsApp group. You could hear in her voice the shock of the reality that she as a mother and wife was facing at that moment: everything most precious to her in the world was surrounded by flames with no way out. She was in constant contact with her husband, but there was no way for her reach them. All she could do was pray and wait.

In the meantime, people were sharing pictures of eerily smoke-darkened skies from Jerusalem all the way to the Jordan River Valley near the Dead Sea. Another hour went by and still the family had not been evacuated.

Smoke fills the skies over Jerusalem and the Jordan River Valley

Finally later in the evening we got word that the family had been successfully rescued by helicopter. It’s hard to imagine your children from ages one to fourteen are being evacuated by helicopter from a fire that’s burning out of control. Hours after the whole ordeal began, at midnight, the children were finally reunited with their mother. The father stayed behind because he is a volunteer firefighter with their village fire brigade. He said that when they left their village, the fire was a meter from their house and shrubs in their yard were starting to catch fire. “In ten minutes,” he thought, “we won’t have a house left.” 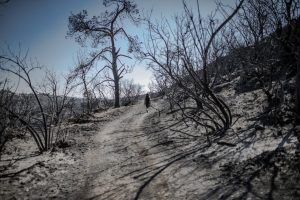 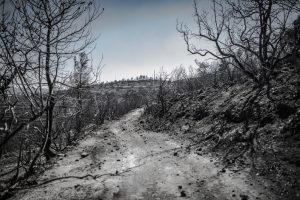 (scenes of devastation around the family’s village)

The next day the Lord put on our hearts this verse from Psalm 125:2

As the mountains surround Jerusalem, so the Lord surrounds His people,

both now and forevermore.

As we were standing in prayer for this family and all the people having to flee for their lives from the flames, this verse encouraged us that God would surround them in protection, just as the mountains around Jerusalem, where this fire was raging, surround her. This family is beloved in Tiferet Yeshua and has the gift of “bringing in guests” to their home: many of us have been graciously and warmly hosted for wonderful Shabbat and holiday dinners. Their village is nestled on the top of forested rise in the Jerusalem Hills, and the views from their home are breathtaking – pine covered hills in every direction.

The next day after their dramatic rescue from the fire, the father sent word that not only had their house survived, but the trees surrounding their home were not touched by the fire. When they look out from their windows, they still see green. Another family of believers in their neighborhood experienced the same thing. 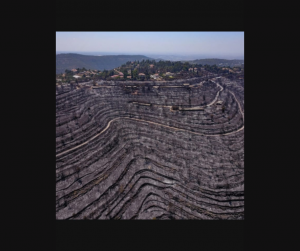 The family’s village which was miraculously protected

The wife said she felt God’s grace surrounding her in the moments of sheer terror over her family, and that grace upon grace has been been carrying them through the whole ordeal day by day. While they have not been allowed back into their home, they asked us to share the story of the amazing grace the Lord has been pouring out on them during this whole ordeal – that even when flames of terror are surrounding us, the Lord surrounds us with His protection and grace.