How Does Purim Point to the Cross?

“Now in the twelfth month, that is, the month of Adar, on the thirteenth day, the time came for the king’s command and his decree to be executed. On the day that the enemies of the Jews had hoped to overpower them, the opposite occurred, in that the Jews themselves overpowered those who hated them.”

The central narrative of Purim is summed up in a Hebrew phrase from the book of Esther – v’nahafoch hu – “and the opposite occured” or “it was turned upside down”.  The Purim principle of V’Nahafoch Hu highlights the dramatic reversals in the story: what Israel’s enemy planned for destruction was suddenly turned into their own destrction and Israel’s salvation.

The theme of the “dramatic reversals” in the story of Esther begins with Haman and Mordechai the Jew – Haman desired praise and the king’s favor, but he was forced by the king to give it publicly to Mordechai, the Jew he despised. Haman then concocted a plan to get Mordechai sentenced to death for his faithfulness to worship only the God of Israel and had a large gallows constructed for that purpose, where, ultimately, he was hanged instead of Mordechai.

The Purim story of dramatic reversals prophetically points to the most dramatic reversal in all history. But, before we get into that, understanding the roots of the conflict will show us how deep they are and how determined God is to remove them.

The Roots of the Struggle – Mordechai and Haman

“Now there was a Benjamite, a powerful man, whose name was Kish son of Abiel, the son of Zeror, the son of Becorath, the son of Aphiah of Benjamin. And he had a son named Saul, choice and handsome, without equal among the Israelites—a head taller than any of the people.…”

The Bible shows us that Mordechai is from the family of King Saul, either descended from the same forefather or perhaps even a direct descendant.

Now let’s look at the personal identification that the book of Esther gives of the villain, Haman. Ester 3:1 describes him as the “… son of Hammedatha, the Agagite.”  This title given to Haman points us to another place in the Bible where we get more information about his background:

“Then Saul attacked the Amalekites all the way from Havilah to Shur, near the eastern border of Egypt. He captured Agag king of Amalek alive, but devoted all the others to destruction with the sword.…”

Here we discover that Haman is a descendant of Agag king of Amalek. Saul, from whose family Mordechai is descended, and Agag king of Amakek had serious issues with each other. The prophet Samuel had sent King Saul into battle against the Amalekites, because, as 1 Samuel 15:1-3 describes, the time had come to destroy Amalek, the ancient enemy of the children of Israel.

The Amalekites were the first nation to attack the children of Israel in the desert after their exodus from Egypt. Unprovoked, the Amalekites ruthlessly attacked the weak and the weary Israelites who were at the back of the procession. Ultimately, the children of Israel defeated Amalek in battle, but God commanded Moses to record their treacherous attack for posterity.

Israel had many enemies – so why was God so adamant about wiping out Amalek specifically? As a people, the Amalekites had most likely become completely corrupted by darkness, and for that they received God’s judgment to be wiped out entirely. In Exodus 17:16, God promised to wage war against Amalek in every generation and ultimately to wipe out the memory of Amalek from the earth. Clearly, God did not mean he would be fighting the Amalekites throughout the generations, because they no longer exist as a people. However, God uses Amalek to represent Israel’s spiritual arch-enemy: Satan.  The struggle against “Amalek”, in the symbolic sense, is the ultimate battle for the hearts of mankind: God created us with a free will to choose between good and evil, to choose the ways of God or of Satan, i.e., Amalek. When God told Saul that he rejected him as king, it was because he had kept the Amalekite king Agag alive – essentially, Saul had compromised with Israel’s most deadly spiritual enemy – Satan.

Israel’s Battle against Amalek and a Picture of the Cross

A day before Israel’s battle against Amalek, Moses said to Joshua: “Choose some of our men and go out to fight the Amalekites. Tomorrow I will stand on top of the hill with the staff of God in my hands.” The next day, when Moses stood on a hill overlooking the battle and raised his staff over his head, with Aaron and Hur holding up his arms on either side, Joshua and the Israelites succeed in overcoming Amalek. The image of Moses holding his staff over his head, shows us a very literal picture of the cross. The figure of Joshua, (Hebrew Yehoshua) who is the leader of Israel’s armies fighting Amalek, is also a picture of Yeshua, Commander of the amies of Heaven. 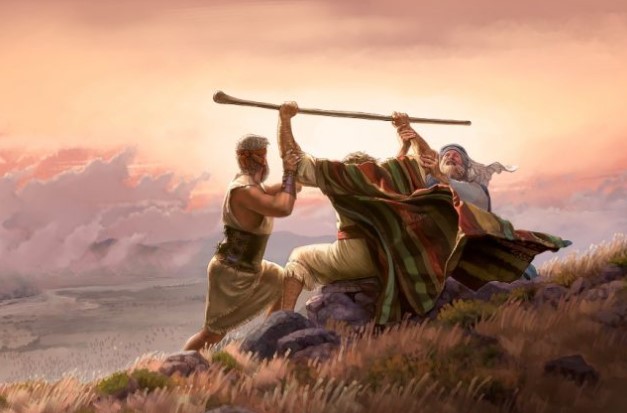 Exodus 17:16 makes an interesting and somewhat puzzling statement, one that is translated in multiple ways.

“And Moses built an altar and named it The LORD Is My Banner. He said, ‘A hand upon the throne of the LORD. The LORD will have war with Amalek from generation to generation.’”

The most literal translation of the words is: “A hand upon the throne of the LORD.” While translators of the Bible have given this phrase different meanings, I see this verse as speaking of the future Messiah who would wage the ultimate war against Amalek for the hearts of mankind. Yeshua the Messiah is described as Yemin Adonai – the right hand of God. We know that the Messiah sits at the right hand of the Father’s throne –the Messiah is the Hand upon the throne of the LORD.

Saul’s compromise with Amalek, essentially with sin, fell to his descendant, Mordechai, about six hundred years later. Mordechai was not a king with an army to fight Amalek: though just a lowly Jewish subject to the Persian king, he was humble, faithful and uncompromising. Mordechai’s battle begins when he refuses to bow to Haman:

All the royal servants at the king’s gate bowed down and paid homage to Haman, because the king had commanded that this be done for him. But Mordecai would not bow down or pay homage.

This enraged Haman so much that he came up with a scheme to destroy Mordechai and his people, building a grand gallows especially for Mordechai. Eventually, Haman is hanged on his own gallows. Haman is publicly humiliated and Mordechai is praised. The king could not nullify His own decree to kill the Jews that Haman had legislated, but he decreed a new law that gave “the Jews in every city the right to assemble and protect themselves; to destroy, kill and annihilate the armed men of any nationality or province who might attack them and their women and children, and to plunder the property of their enemies.” (Esther 8:11)

The most dramatic reversal in history is accomplished by Yeshua on the cross: from seeming defeat by the forces of darkness with His death on the cross and descent into Sheol, Yeshua reversed it in His resurrection, overcoming death and the powers of darkness:

I was dead, and behold, now I am alive forever and ever! And I hold the keys of Death and of Hades.

…having canceled the charge of our legal indebtedness, which stood against us and condemned us; he has taken it away, nailing it to the cross. And having disarmed the powers and authorities, he made a public spectacle of them, triumphing over them by the cross.

Haman had to make a public spectacle of himself by leading his hated enemy, Mordechai, through the streets on the king’s horse, wearing the king’s robe and proclaiming, ‘This is what is done for the man the king delights to honor!’” (Es. 6:9). After Haman is hanged on the gallows he had prepared for Mordechai, Mordechai rises to become the king’s chief advisor. After Satan is defeated on the cross that he thought would defeat Yeshua, Yeshua rises to be above all power and principality and sits to the right hand of the throne of God the Father. That is the most dramatic reversal in all human history. The story of Esther and the “dramatic reversals” in it encourage us and point to the ultimate reversal that the Messiah would bring about on the cross.

Though we are saved – the battle continues!

In the Spirit, the “Nahafoch hu” was completed for us when our spirits were born again, made holy, and we are seated in heavenly places with Yeshua above every power and principality of darkness. But in the realm of our souls and our bodies, the situation is different – there we are still engaged in a process to battle against our spiritual enemy to attain that “great reversal” in ourselves, another way of describing the process of sacntification and victory over the enemy.  Just like the Jews in Esther were empowered and backed up by the king to “destroy, kill and annihilate” their enemies, we have been empowered by the High King of heaven to battle our ancient enemy in our hearts and minds unto victory!

For though we live in the world, we do not wage war as the world does.  The weapons we fight with are not the weapons of the world. On the contrary, they have divine power to demolish strongholds.  We demolish arguments and every pretension that sets itself up against the knowledge of God, and we take captive every thought to make it obedient to Christ. 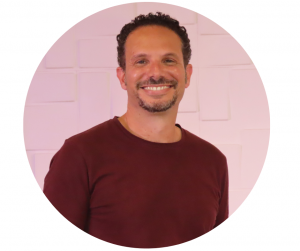