The Destruction of the Second Temple and Baseless Hatred 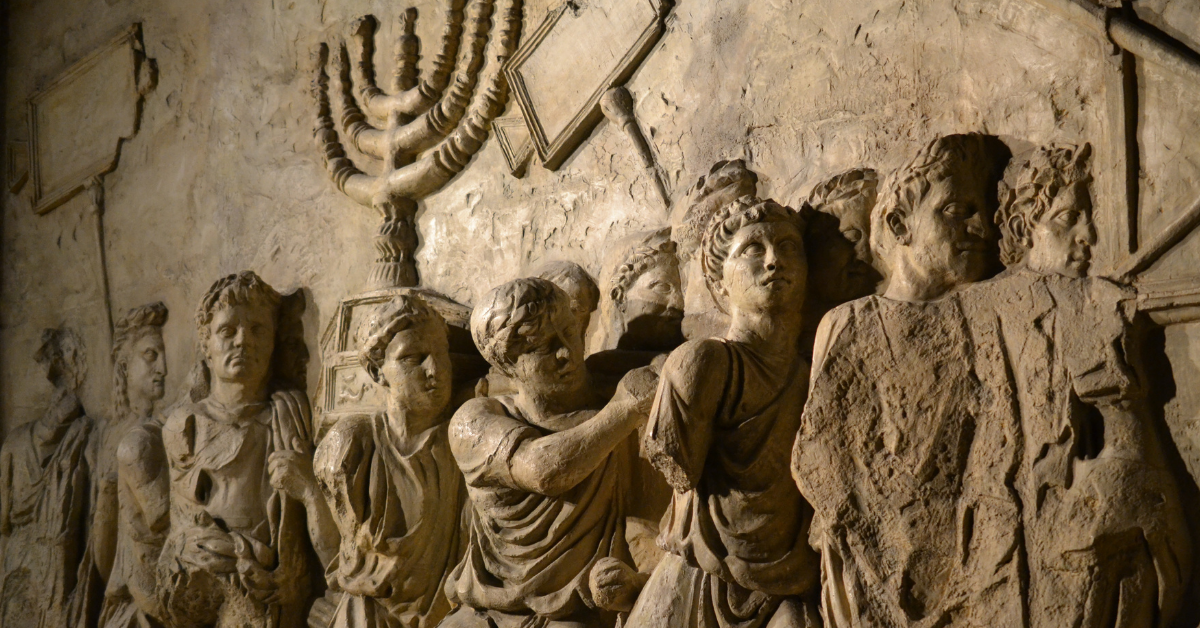 “Jerusalem, Jerusalem, you who kill the prophets and stone those sent to you, how often I have longed to gather your children together, as a hen gathers her chicks under her wings, and you were not willing.  Look, your house is left to you desolate.”

The destruction of the Second Temple in 70 AD on the 9th of the Hebrew month of Av was a profoundly momentous historical and spiritual event which the Roman general Titus himself perhaps recognized: he reportedly refused a victory wreath, claiming that he was just the vehicle through which the Jew’s God was punishing them. Indeed, the siege of Jerusalem that led up to the destruction of the Temple was a long, drawn-out nightmare for all those trapped in the city. The proportions of their suffering are staggering and recall Yeshua’s prophetic exhortation a generation earlier to the women of Jerusalem who were mourning for Him as he bore His cross through the city:

“Daughters of Jerusalem, do not weep for me; weep for yourselves and for your children. For the time will come when you will say, ‘Blessed are the childless women, the wombs that never bore and the breasts that never nursed!’ Then “‘they will say to the mountains, ‘Fall on us!’ and to the hills, ‘Cover us!'”

The Great Jewish Revolt – The Beginning of the End

In AD 66, rival Jewish rebel groups began a revolt against the Roman occupation of Jewish lands. Some of the rebels were driven by the desire for political freedom from Rome, some were driven by messianic fervor for a full physical and spiritual redemption. When the Romans succeeded in putting down the Jewish rebellions in the north in the Galilee, the rebel groups fled south to Jerusalem where, instead of focusing on the Romans, they began fighting each other.

In the spring of 70AD, the Romans legions commanded by Titus began the siege of Jerusalem during the festival of Passover. His calculations for timing were brutal: Titus had allowed the Passover festival to continue unhindered with pilgrims streaming in from all over the country for the feast. That was the moment Titus began his siege: outside the city were four Roman legions, inside were Passover pilgrims, city inhabitants and three rebel factions vying for control with increasingly cruel violence.

The Jewish resistance in Jerusalem had no chance to withstand four Roman legions, and eventually they would have been overcome. However, the cruelty that the rebel zealot factions inflicted on each other increased the number of causalities and the suffering of the people way beyond what the Romans could have done on their own. The Jewish in-fighting made the Roman’s job easier, and Titus decided to let the Jews destroy themselves. His calculation proved right: at the beginning of the siege, zealot factions burned a stockpile of grain that could have lasted the city for years. This insane act quickly brought on starvation and suffering and hastened the fall of the city.

The vision of suffering and desolation that Yeshua had seen a generation before came to pass. The account of the Jewish historian Flavius Josephus describes the situation in Jerusalem at the beginning of the Roman siege: there was the constant noise of the rebel zealots fighting each other mingled together with the sound of weeping and mourning over the dead. In his book, Of the War, Josephus describes how the misery of starvation eventually changed the sound of the city:

The upper rooms were full of women and children that were dying by famine, and the lanes of the city were full of the dead bodies of the aged. The children also and the young men wandered about the market places like shadows, all swelled with the famine, and fell down dead, wheresoever their misery seized them. As for burying them, those that were sick themselves were not able to do it; and those that were hearty and well were deterred from doing it by the great multitude of those dead bodies…A deep silence also, and a kind of deadly night had seized upon the city.

One of the most startling things to imagine about the destruction of the Temple in 70AD is how Jerusalem looked toward the end of the three-month Roman siege. According to Josephus, Jerusalem was a stately, beautiful city surrounded by richly wooded hills. During the siege, the Romans had cut down all the timber on the hills for fifteen kilometers in order to use in constructing bulwarks, battering rams and also for crucifying people. Anyone caught escaping the city, whether man, woman or child, was crucified atop a great siege bank that had been built up around the city.

At one point, as many of five hundred people a day were being caught trying to escape and crucified opposite the city walls. Inside the city was death from starvation and murder. Outside the city were thousands of crucifixions. Beyond that, barren hills where all the trees had been cut down. It is a scene that calls to mind some of the most harrowing images of the holocaust.

On the 9th of the Hebrew month of Av, (4th of August), Titus’s forces breached the city walls from the north and commenced a great slaughter of those left inside. Many of the survivors fled to the Temple for protection where they met their end. According to Josephus, a river of blood flowed down the Temple stairs. Before setting fire to the Temple, the Roman legionaries made pagan sacrifices on the Temple’s holy alters. Afterwards,  they took nearly 100,000 Jewish captives who were sold into slavery all across the Roman empire. 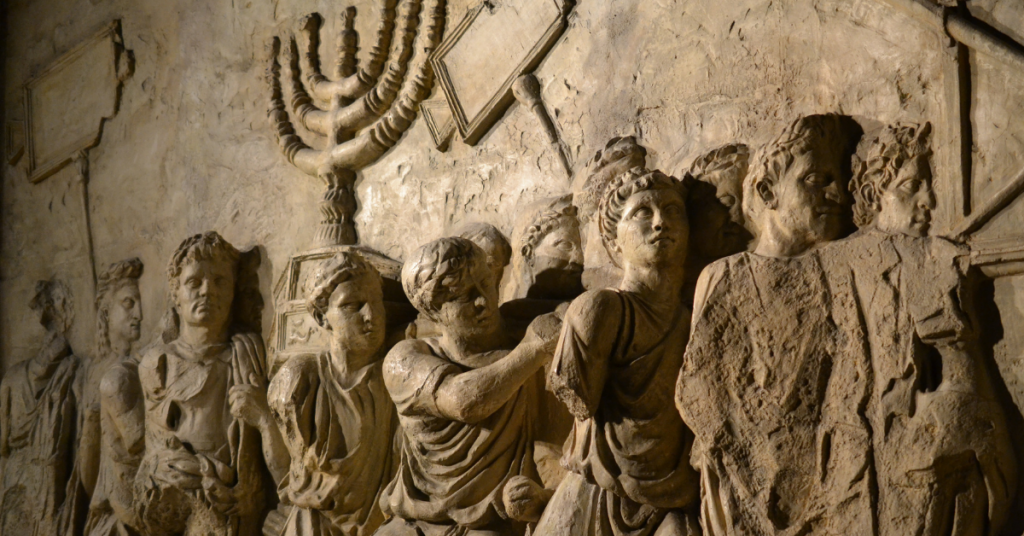 From the Arch of Titus: the victors parading the golden objects from the Holy of Holies through the streets of Rome, followed by Jewish slaves

Years ago, our family took a tour of the temple tunnels in Jerusalem which was led by a young orthodox guide. After detailing the destruction of the Second Temple, she added, “The Romans did not destroy the Temple. We did it with our baseless hatred.” She was echoing the consensus rabbis had reached several generations after 70 AD: the Jewish rebellion had been a bad idea, and the destruction of the Temple was not due to Roman military superiority but rather “seenat cheenam”, baseless hatred among the Jews.

After our tour of the Temple tunnels, we asked the young woman who had been our guide a pointed question: Considering the fact that the First Temple was destroyed and the people exiled for seventy years because of worshipping other gods and sacrificing their children to Molech, did it make sense to her that the zealots’ hatred for each other was cause for the destruction of the Temple and a two-thousand year exile? She did not know what to say. “Seenat Cheenam” (baseless hatred) was the reason the rabbis had given her. What other reason could there be?

If I had not done among them the works no one else did, they would not be guilty of sin. As it is, they have seen, and yet they have hated both me and my Father. But this is to fulfill what is written in their Law: ‘They hated me without reason  ’

In the Hebrew translation of this verse, Yeshua says: seenat cheenam sanuni, quoting Psalms 35 and 69. Yeshua did in fact agree with the assessment of future rabbis that “seenat cheenam” (baseless hatred) was the reason that the Temple was destroyed and the Jews exiled—but with one key difference: it was the rabbis’ “baseless hatred” of Yeshua, the Messiah of Israel, that led to the Temple’s destruction and a two-thousand-year exile. Not the hatred of rival zealot factions.

As we observe the solemn date of the 9th of Av, a divine date on which my nation has suffered so much, I feel the same sense of sadness and heaviness that I feel on Holocaust Remembrance Day. The holocaust of Jerusalem in 70 AD was brutal and desolating, and it marked the beginning of the end of Jewish rule in the Land and the beginning of a two-thousand year exile. In Israel today, we are living a miracle: there is Jewish rule in the Land of Israel for the first time since 70 AD. And just like during that time, there are also Jewish followers of Yeshua living in the Land today. So while there is sadness in remembering how much suffering there has been, there is joy remembering God’s faithfulness to His promises in His Word to relent from His anger, to return us to our Land, and to pour out His Spirit upon us!